The Visual Style of London Gothic 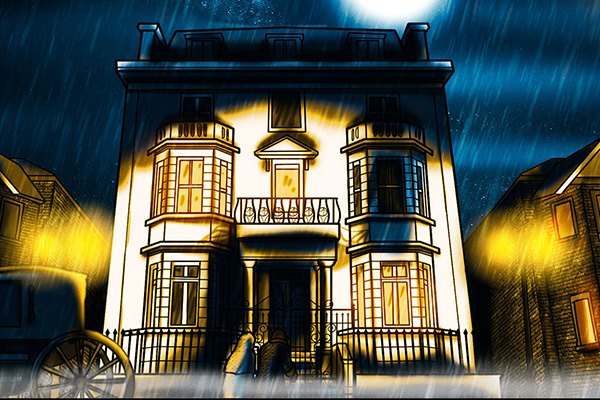 I thought for this month I would give Nick a break from producing the blog and give you all a sneak peek in what has been happening in the illustrative creative world of LG.

We constantly upload pictures & snippets to our Social Media channels but what is actually going behind the scenes?

In creating the visual style for London Gothic we wanted to give a movie like feel and have it stand out from other graphic novels. Realism is key to getting across the horror elements and giving them as much impact as possible. To this end we designed the characters and world to be realistic and darkly atmospheric.

I had been developing a new style of rendering for a few years but didn’t have a project that would fit it, until London Gothic came along. This style uses real world textures to give a much more gritty feel to the art and really sell the gory moments.

Lighting is everything in film and in London Gothic it ties all of the images together, rendering the light effects and shading over the inks gives a more realistic image and will hopefully sell the seedy underworld of Victorian London.

We are really pulling out all the stops on the artwork for London Gothic, we have some amazing guest artists creating unique time period accurate paintings that appear in the background in panels in certain locations throughout story combined with meticulous attention to detail to accurately depicting the time period and the remnants of the world Nick spent his youth imagining and exploring.

We’ve been collecting thousands of reference photos and paintings to inform the artwork and to really let the reader step into past and explore this terrifying world.

We are hoping the final product will be a spectacle for the eyes and lives up to the amazing world and incredible cast of characters that Nick has concocted.